The vessel is 66′ 4″ long. 18′ beam. 8′ 6″ draft at the stern and 4′ at the bow. She weighs approximately 160 tons displacement dead-weight and is registered at 49 43/100 tons (Thames Builders measurement.) Her derrick can lift 1 ton. She was fitted in 1943 with a Cochran vertical water tank boiler. This has 5 water tubes and 1 furnace door on the starboard side. There is a 7 ton coal bunker on the starboard side and a 5 ton one on the port side. The engine was built in 1943 by Crabtrees of Great Yarmouth. The engine is identical to the one in Lydia Eva, herring drifter. It is a compound steam engine developing 120 horse power. Two cylinders, (compound), the High Pressure cylinder has a piston valve and the Low Pressure cylinder a slide or matchbox valve. Total loss oil lubrication system. The wall Pump  boiler feed made by Simpson Strickland and the General Service pump made by Worthington & Simpson. The main engine exhausts into a condenser, thus the used steam is pumped back into the boiler as hot water in a circulating system. So actually we don’t puff! No Puffer has since prior to 1920. The old Puffers, thus named onomatopoeically, used to exhaust steam up inside the funnel. Thus one would get a puff of steam, a puff of smoke and I believe sometimes they would blow smoke rings! The engineers were always tempted to put salt water into the boiler as they would soon run out of fresh water. The condenser is cooled by salt water pumped from one of four pumps operated from a ram off the high pressure piston rod. The other pumps are an air pump that controls the vacuum, a return boiler feed pump and a bilge pump. The engine can be controlled from the wheel house by dint of a remote reversing lever main steam valve and an impulse lever. This later lever was useful psychologically when careering toward a stone wall or an expensive yacht. After one had gone full astern, having opened the steam valve as much as possible it helped to hold the impulse lever up and at least one was doing something. This puts live high pressure steam underneath the high pressure cylinder. 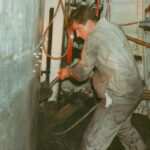 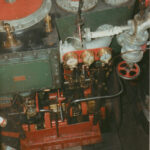 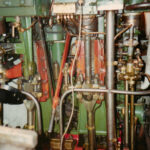 When we first bought the boat we were allowed to operate with 120 lbs per square inch of steam but the boiler was derated in 1976 to 105 lbs per square inch. Hopefully the new boiler will be back up to 120 lbs as the slide valve on the Low pressure cylinder valve will behave itself better.

Here is a link to our Facebook page: https://www.facebook.com/puffersteamboatholidays